Parents and teens are stuck at home, libraries are closed, so I'm offering BOTH of my books (e-book version) for FREE right now on Amazon. No strings attached. I know it's not much, but it's something. Feel free to share 😊https://amzn.to/33IApCk
Posted by Angela V. Cook at 1:29 PM 4 comments:

The Pieces Duology is Now On Kindle Unlimited!

However, you can read both books for FREE WITH KINDLE UNLIMITED!!

Also, if you're wondering where I can be found in the realm of social media these days, my author page on Facebook is my hang out of choice lately. Feel free to stop by and say, "Hi" or comment on one of my weekly senseless surveys 😏. I love meeting new people!

As always, thanks for taking the time to stop by and happy reading!

Just popping in to let you all know that THOSE WHICH REMAIN is officially out in the wild and available for purchase. You can pick up your copy at Amazon.

Also, the first book of the duology, INTO A MILLION PIECES is currently only .99!! So if you haven't read it, now's your chance!

If you're a book reviewer and are interested in receiving a free copy of THOSE WHICH REMAIN (and/or INTO A MILLION PIECES) to review, just contact me at angelavcook(at)gmail(dot)com with you website, email, and your preferred format (mobi or epub).

Hope you guys love it and it doesn't disappoint! Enjoy your Sunday, and happy reading!!

Cover Reveal for THOSE WHICH REMAIN

My book cover is done!!! The designer kept it similar to that of the first book (same title font, same model), yet this cover "feels" totally different than the first. I wanted something that was clean and simple, yet properly portrayed the mood of the book. I think this cover does exactly that! 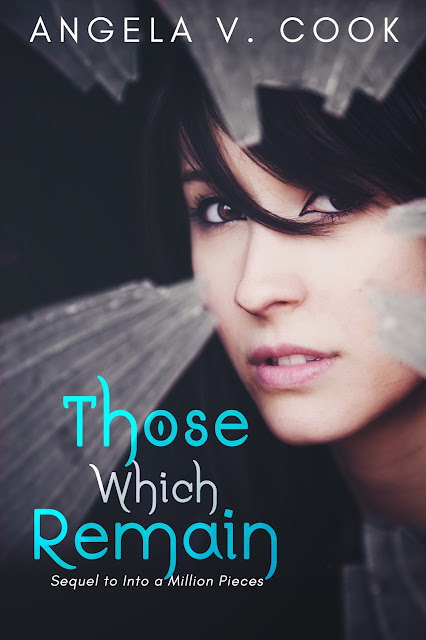 *Blows off cobwebs, coughs and sputters from the dust*

*Clears throat* I apologize for interrupting the chirping crickets in the background, but I wanted to let you all know that THOSE WHICH REMAIN, the sequel to INTO A MILLION PIECES, will be released this January!

To give you a little taste of what to expect, here's the back-cover description I've been working on:


In Into a Million Pieces, seventeen-year-old Allison solved her sister’s murder, barely escaping an attempt on her own life. Now, with the past behind her, Allison is finally getting a taste of teenage normalcy—going to school, hanging out with her best friend, and sharing it all with her loving boyfriend, Ren. Life is good.

But it doesn’t stay that way. It never does for a succubus.

When Allison's nature draws in a predator, shattering her sense of trust and safety, she realizes the succubus curse is behind all the darkness and heartache in her life. Determined to end it, she tracks down a distant relative with knowledge about the curse. But more questions are raised than answered when Allison meets the mysterious and wealthy Leona Doriano. Suddenly thrust into a dangerous world of money, power, and deadly secrets, Allison must find a way to break the curse—a curse not everyone wants broken—before she’s drawn in too deep.

As you may have noticed, I said "I've been working on," because yep, I'm self publishing this bad boy. No, there wasn't a nasty falling out between me and my publisher. My experience with Red Adept Publishing has actually been very positive. They're just no longer publishing YA titles. It was strictly a business decision, and even though I was disappointed, I totally understood. The YA hype brought on by books like TWILIGHT, THE HUNGER GAMES, AND DIVERGENT has definitely died down, and selling YA books is getting tougher and tougher.

Self publishing was not an easy decision to make. The thought of doing (and paying!) for everything myself TERRIFIED me. I contemplated not publishing the sequel, but I'd already written it, and allowing readers to see how Allison's story ends has always been important to me. I know the chance is very slim I'll earn back the money it's costing me to put it out (editing, cover design, formatting, etc.), but that's okay. I've accepted the fact that this book is more a labor of love than a means of income.

Stay tuned for all the fun stuff coming up in the months ahead, and as always, thank you to the readers. Your love of Allison's story (and the beautiful reviews!) helped keep me going when things got rough and tough. I hope you're just as excited to read THOSE WHICH REMAIN as I am to share it!

So, I feel kinda bad... I've been MIA these past few months, and not just on here, but everywhere. My Twitter account has cobwebs, and Facebook has been sending me these "Um, you haven't posted anything in a while... Are you still alive" type of messages. Well, I just wanted to post a little something to let you all know (all three of you? on a good day?) I am still here. I have not left the writing world, I have not let my fame and fortune go to my head (little humor), and I am STILL working on my sequel.

Here's the thing. I am not just a writer. Don't get me wrong... I enjoy writing. Some days I love it. And in a perfect world, I'd be able to do it eight hours a day. But this is not a perfect world. Other things in my life take precedence, and I'm not afraid to admit that.

As writers, there's this unspoken rule (actually, it's not really unspoken) that our entire lives must revolve around writing. We have to write every day (if you're not finishing a book/year, why bother?), know what's going on in the business, be active on half a dozen social media sites, read until our eyes bleed (and if you can't finish a book/week, then you shouldn't write books), own this book/that book, have read this book/that book, love Star Wars/Harry Potter/Lord of the Rings, think Stephenie Meyers and E.L. James both suck and question how they ever got published... blah, blah, blah. Okay, I'm getting off track--my disillusionment with the writing community is whole other post. What I'm saying is, I'm tired of "the rules" and of people telling me I have to do A, B, and C in order to be a "real" writer. I am a writer, but it doesn't define my life. I'm a hard-working employee, a wife, a daughter, and most of all, a mother.

My life is busy right now. I'm still working on my sequel when I can, and it will come out (eventually) one way or another. I am in love with the story, and I think readers are really going to enjoy the little journey I take them on. That being said, I'm busy. And I'm tired. And I'm doing the best I can.

Thank you to those of you who still stop by occasionally looking for updates. I promise you, you will get the opportunity to read the continuation of Allison's story (it might not be for five more years... KIDDING!). As always, thank you for loving her story and for your continued support!!
Posted by Angela V. Cook at 5:39 PM 13 comments:

Ah, yes... it's that time again... the traditional "New Years" post. It's kind of crazy to think back to this time last year when I was caught up in the stress--and excitement--of preparing for the release of my debut novel. I hate to sound cliché, but wow, it's been a wild year. The first half was all about getting the word out about my book, in other words, a year spent contacting reviewers, answering interview questions, writing guest posts, contacting reviewers, participating in giveaways, contacting reviewers, did I mention contacting reviewers? Oh, and let's not forget the ever-important task of stalking Goodreads and Amazon.

It the middle of all that, we also tried selling our house. We actually received an offer, but it fell through, which caused the [contingent] offer we had put on a house--which we loved--to fall through. And as if the stress of releasing a book and trying to sell/find a house wasn't stressful enough, towards the end of the summer I received a promotion at my job. I went from a part-time, low-stress position to a full-time, high-stress, supervising position. The change has been a huge adjustment and has had an equally huge impact on my writing time.

Up until a couple of weeks ago, I hadn't written anything in over two months. BUT, I'm happy to say that due to some extra time off around the holidays, I was able to get some writing done, and on January 3rd (a few days after my self-imposed deadline), I posted this to my Facebook page: 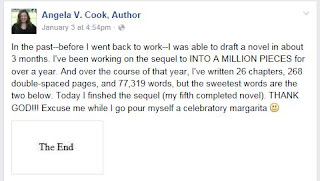 Yep, the sequel to INTO A MILLION PIECES is DONE!!! Of course, I probably have about 138 rounds of revisions ahead of me, but the bones of the story are there, and it feels like a ten-pound weight has been lifted off my shoulders. I'm so excited for everyone to read this book. There are some fabulous new characters and lots of unexpected twists and turns! Oh, and thanks to some awesome feedback I received in reviews, a lot of questions readers had get answered.

Before I sign off, I want to take a minute to thank those of you who showed your support in 2015. Whether you hosted me on your blog, wrote a review, or just helped get the word out about my book, I appreciate it more than you know. Thank you, thank you, thank you!!